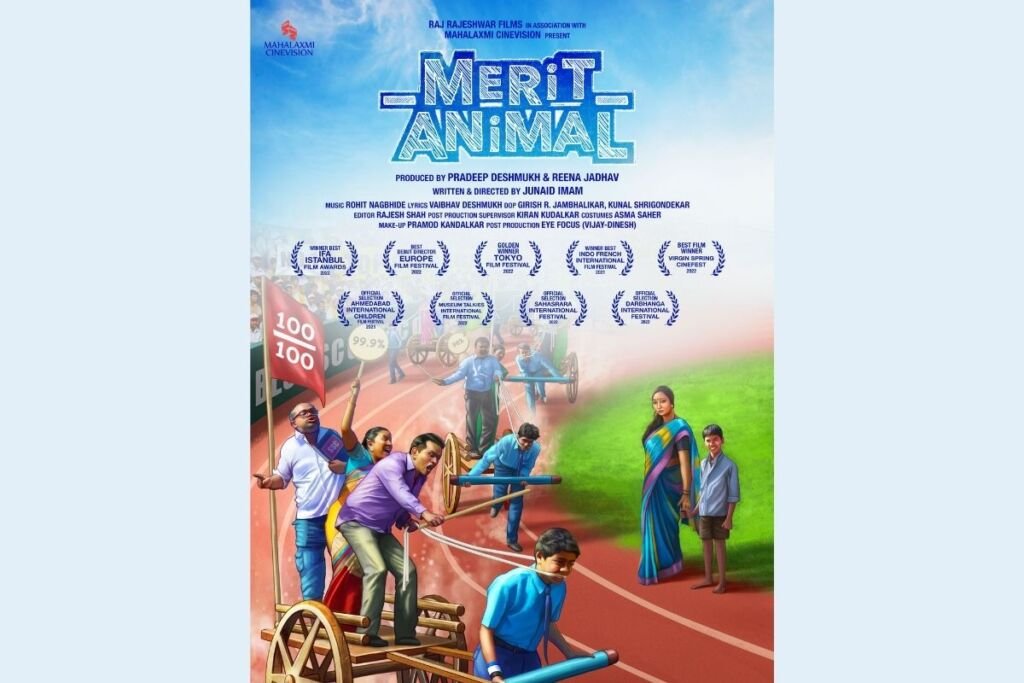 Mumbai, April 16: After travelling all around the world and making its appearance globally, Merit Animal is all set to release in India. Produced by Pradeep Deshmukh and Reena Jadhav under the banner of Rajrajeshwar Films & Mahalaxmi Cine vision and directed by Junaid Imam, Merit Animal is a social drama. Junaid Imam has given the story, screenplay, and dialogue. Music by Rohit Nagbhide, lyrics by Vaibhav Deshmukh, cinematography by Girish J Jambhalikar and Kunal shrigondekar. Reena Jadhav, Mangesh Naik, Aditya Singhal, Mahesh Ghag, Bahar ul islam and Bhagyarati Bai Kadam are in the various roles.

Merit animal revolves around a boy named Varun who is only 16 and goes missing from a cycle racing competition. Varun finds him in a remote village where there is no sign of any modern technology. Varun was spotted by a poor couple Meera and Mohandas in the village named Gunapur. Varun doesn’t remember anything, the leader of the village suggests Varun to stay in the village for a few days and send a person to the nearby city. Mohandas and Meera have a boy named Muniya who is very naughty. Muniya takes Varun along and involves him in all his plays and mischiefs. All this was quite new for Varun. Whenever Varun is asked to participate in a play, he takes it as a competition. Due to this approach, all other children begin to maintain distance from him. One day Varun was talking to a statue in the village. He mentioned that he is from a big city called Mumbai. His parents would regularly push him to get into merit. Last year one of his friends committed suicide under the pressure to perform. Varun’s parent wants him to score highest in all the areas. He meets with an accident trying to meet their expectations. And he realizes that in this mad race of numbers he is actually getting away from his childhood joys. In a few days the village festivals get started. During these festivals, people from the village would teach their children to learn the old traditional work style. There’s a Bull’s race being organized in the village. Looking at that race, Varun identifies himself as the Bull who is facing the hard realities of life. Varun’s parent has been looking for him and they find him there in the village. Varun is happy to meet his parents. His parents inform him that the race in which he had fallen is happening again and he needs to participate in it. Varun starts to ponder. The bull owned by his friend Muniya finally wins the race. As the bull is being taken back, Varun offers a unique gift to the Bull from the field of education.

Actress and Producer Reena Jadhav said “On the release of the film Merit Animal actor-producer Reena Jadhav quoted this film is really special and close to my heart. Its a debut film for me as a producer and a comeback film as an actor. The storyline of the film focuses on the acute problem of the society. To fulfill our own dreams we burden our children to be at their best which is actually a pressure for them. In this race, everyone wants to be at the top but in the mean while they actually overlook their present childhood. We tried to convey the hypocritical two faces of the education system through this film.

One is competitive urban life and the other one is rural hardship. We have presented this valuable thought through this Cinema because Cinema is a mirror of society and a Quick fix to help reach mass through countenance and vocalising the real world matters thru its cinematic window.  Cinema both entertains and equally educates a large number of people. “We hope our film Merit Animal proves to be an Eye-opener for our society.

The post Merit Animal is all about missing childhood for the rat race- Reena Jadhav appeared first on Republic News Today. Tagore’s debut as an Author of “The Emperor Cried” A New Sensational Duo in the Music Industry “Ashanx”