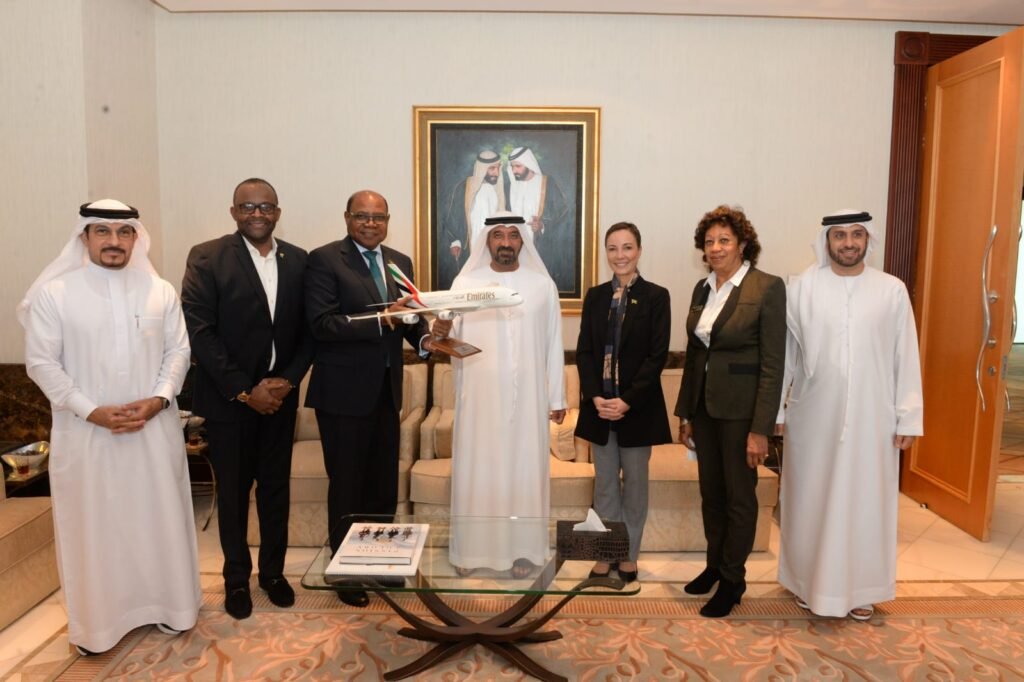 New Delhi,  March 8: Under the theme “The riddim that connects the world”, the Jamaica Pavilion at the World Expo 2020 Dubai, aims to introduce and position Jamaica as a logistic hub connecting the Americas to the rest of the world. With the island strategically located, providing direct connections to major gateways, this makes the destination even more appealing to tourism investors and stakeholders in the airline industry.

Emirates Airlines is a premium airline from the Middle East region, and Jamaica’s Tourism Minister, Hon Edmund Bartlett has initiated discussions with top representatives of the airline during his visits to the World Expo 2020 Dubai. These discussions aim to enhance connectivity between the regions by facilitating airlift.

In an ongoing effort to enhance the connectivity efforts between Asia, the Middle East, Africa and Europe to Jamaica and the rest of the Caribbean and Latin American region, Minister Bartlett held meetings with His Highness Sheikh Ahmed B in Saeed Al Maktoum, Chairman and Chief Executive of the Emirates Group. Jamaica’s well developed and world-class infrastructure was an essential element of the dialogue as mention was made of the highways, airports and seaports including the existing air and sea connectivity within the region. The island’s meetings incentives conferencing and exhibitions (MICE) facilities which attract tens of thousands of business travellers for conferences, tradeshows and corporate activities are major advantages. Donovan White, Director of Tourism, Jamaica also presented relevant data on the island’s tourism product as he provided details on potential growth in airlift capacity in terms of potential flyers.

Minister Bartlett also briefed the Emirates delegation on the expansion of the Panama Canal and the benefits that Jamaica will gain from new and innovative commercial ventures as it seeks to position itself to join Rotterdam, Dubai, and Singapore as the fourth node in the international logistics chain. Director White gave an update that the Montego Bay Convention Centre is preparing to host the World Free Zone Organization (WFZO) AICE 2022 and is expecting 3,500 delegates from across the globe, with over 70% of that expected from Asia, Africa and Europe. Launched in UAE, the World Free Zone Organization will be hosting its annual AICE 2022 on June 13 – 17 in Jamaica.

Given Jamaica’s geographical location in the centre of the Americas, efforts are being made at an opportune time between Emirates Airlines and Jamaica to be partners to the wider region. How this spiritual healer from India getting international recognition